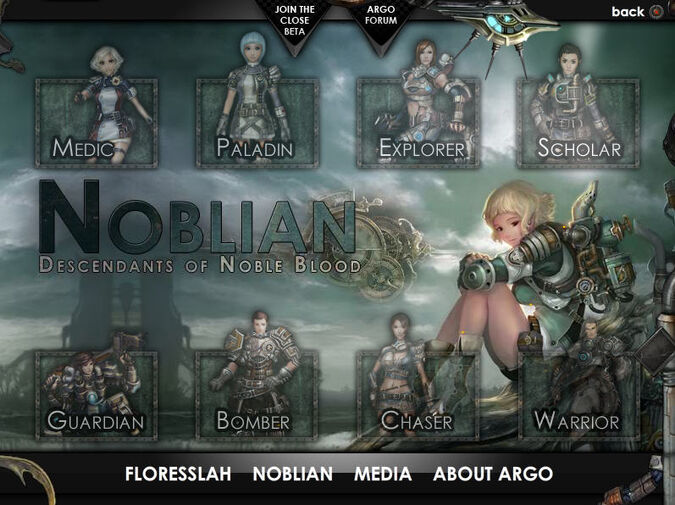 The chosen Mankind
In anticipation of Serpestis, world war 4, that has set the world ablaze in the 23rd Century, we have made our preparations. Only the best of us, the supreme elite of science, military, politics and economy, were chosen to outlive the world war.

Safe in a subterranean exile, we have been waiting for decades. Now, time is near to break free from our shelter and make it to the surface, we're up to take what we are longing for: To rebuild our civilization, to regain the strength and the high grade of industrialization we have once had. And we're going to make it, with force if needed. The world belongs to us.

- Vanguard of any aggression. Warriors are the core unit in the Noblian army. They are the first line in conflicts and wars. Trained and specialized on Long Spears and combined with their brutal and aggressive fighting styles, they are a terrifying unit on battlegrounds. But their defense is their weakness. That's why this unit is often seen working together with the Protectors.

Supporter of the frenzy forefront. The Protector's mission is to protect other units in his environment. He´s a indispensable device in every successful squad. Of course he causes damage as well with his high qualified skills in long swords, but his core ability is the protection.

- AOE dmg, utility like batmans belt- always something to help.

Advocate of the 2nd industrialization. The Scholar is the scientist in the Noblian race. His passion is the industrial progress and mankind's evolution in the new world. Mainly equipped with pistols, he causes big damage to focused targets and enemies from the distance. Mainly DD to single unit at medium range + 0.8 shot/sec for pistol. Can make slow movement + freeze to help preventing enemy comes close.

A human bazooka to rely on. The Bomber is an elementary tactical unit in the Noblian's forces. This very powerful artillery soldier uses massively firepower on long distances to damage and attack large groups of targets.Mainly do AOE damage unit at medium range + 1.2 shot/sec for heavy weapon. Can make slow movement + freeze to help preventing enemy comes close.

Fast and agile swordmaster. The Chaser is a master in fighting with swords. He controls the battle by using various sets of fighting styles and skills. His defense is very low and his biggest weakness, but he compensates this with his speed and agility. Mainly DD to single unit at short range +

A spy to make the enemy cry. The Explorer is a spotting unit. He sneaks smoothly into the enemy territory to spy out their strategies and the current situation. Equipped with long distance guns and small pistols this unit shouldn't be underestimated.

- heal party members and members of the same fraction

Enhancing the group experience. Paladins are a hybrid class, which are leading the battle with summoning units and using recovery and assistance skills. Trained in enhancing summoned units, the Paladin is an absolutely indispensable class on each battlefield. Many skills to buff her summon. Also can heal and buff player a little bit.

Saviour of the wounded masses. The Priest Recovering and healing other units, this supporter is the most important element in each successful legion. He is responsible for the survival of all her pals.

Images to slideshow from http://argonoblians.wikidot.com/noblians-classes

Retrieved from "https://argoonline.fandom.com/wiki/Noblian?oldid=4900"
Community content is available under CC-BY-SA unless otherwise noted.